Will You Be Wearin’ the Green?

“There are only two kinds of people in the world,” an old Irish saying goes… “The Irish and those who wish they were.”

But for 24 hours on St. Patrick’s Day, that saying is a pot o’ blarney. For most of us… we’ll all be Irish. We’ll be wearing green, drinking green beer, eating corned beef and cabbage… and wishing we could find that pot o’ gold at the end of the rainbow. We be looking for leprechauns.  As Mike Rowe sees it…

On St. Patrick’s Day it is customary to wear shamrocks and/or green clothing or accessories (the “wearing of the green”). St Patrick is said to have used the shamrock, a three-leaved plant, to explain the Holy Trinity to the Irish.

The color green has been associated with Ireland since at least the 1640s. In the 1790s, green became associated with Irish nationalism when it was used by the United Irishmen who launched a rebellion in 1798 against British rule. The phrase “wearing of the green” comes from a song of the same name, which laments United Irishmen supporters being persecuted for wearing green. Not only that, but singing the song in public was punishable by hanging!

Part of the lyrics go:

Where rich and poor stand equal in the light of Freedom’s day.

Ah, Erin, must we leave you, driven by a tyrant’s hand

Where the cruel cross of England shall never more be seen

And where, please God, we’ll live and die, still Wearing of the Green.

According to the U.S. Census Bureau – 36.9 million United States residents claim Irish ancestry, or more than eight times the entire population of Ireland today, which stands at 4.5 million. The number of Irish-Americans in the U.S. is the second largest among U.S. ethnic groups.

Chicago is famous for dyeing the Chicago River green on St. Patrick’s Day. In 1962, a pipe fitters union, with the permission of the mayor, poured green vegetable dye into the river. Each year only 40 pounds of dye are used, but it is enough to turn the river green for several hours.

For dinner, millions of people will sit down to what they think is an authentic Irish meal of corned beef and cabbage. Only half of it is really Irish. Though cabbage has historically been a staple of the Irish diet, it was traditionally eaten with Irish bacon, not corned beef. Irish immigrants in America could not afford the bacon, so they substituted with corned beef, a cheaper alternative (picked up from Jewish immigrants).

Will, you be wearin’ the green come Saint Patrick’s Day? Forgot to wear green on St. Patty’s Day? Don’t be surprised if you get pinched. No surprise, it’s an entirely American. St. Patrick’s revelers thought wearing green made one invisible to leprechauns, fairy creatures who would pinch anyone they could see (anyone not wearing green). People began pinching those who didn’t wear green as a reminder that leprechauns would sneak up and pinch green-abstainers. 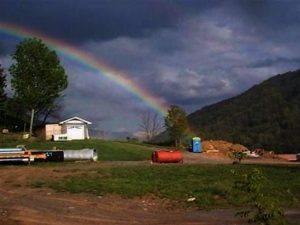